The name “Mahoosuc Notch” evokes a lot of trepedation and excitement among thru-hikers.  It is talked about among the northbounders as far south as Georgia, whispered like some magical portal through which only the worthy will pass into Maine.  Southbounders have other things to think about, like the 280 other miles of Maine, but Mahoosuc beckons as one last, huge obstacle course on their way to the White Mountains of New Hampshire, Maine’s last best chance to twist your ankle, sending you home in despair and pain.  However for most, Mahoosuc is one giant jungle gym, not something to fear but to respect, and enjoy exceedingly.  It is quite unlike any other place on the AT, and it is quite fun, especially for a rock climber like Marie and a, well, Wyoming boy like myself. 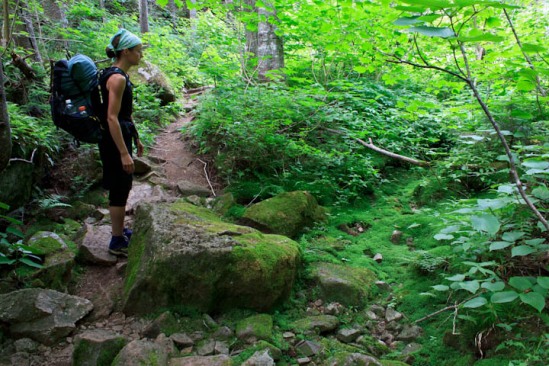 This spot was really, really green, so we stopped. 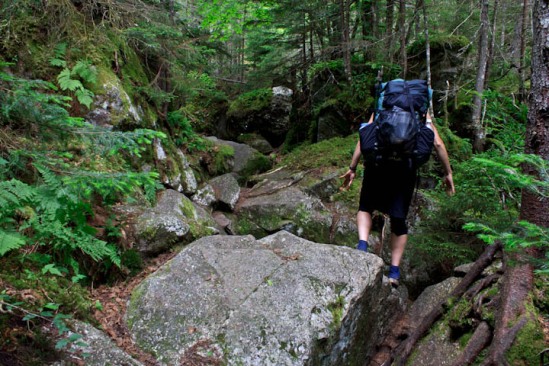 Mahoosuc Notch is at the bottom of a ravine between two very steep cliffs, and the bottom of it is filled with boulders of all sizes, including truck size, volkswagen size, refrigerator size and piano size.   It’s reputation is quite deserved because navigating all of this takes a lot of time, a careful step, and at times going under small caves, removing ones pack and sliding on the ground. 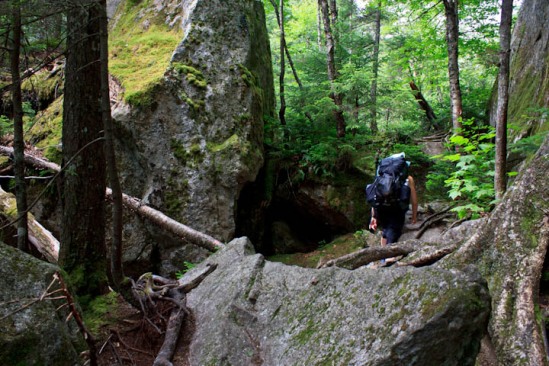 We had filled up water at the beginning of the notch from the stream that flows far beneath the rocks, only to find out 20 yards down the trail that the stream we filled at flows from a beaver pond.  We had just heard someone talking about “beaver fever,” and halfway through the notch a German hiker talked to us, randomly bringing up the subject of “beaver fever.”  I had never heard the expression and worried it was some water borne illness outside the usual suspects of giardia and cryptosporidium, for which we are treating the water we drink.  The German told us specifically that the black slime on the rocks is a sign that “beaver fever” is in the water.  Remembering the black-slimed rocks we walked on to collect the water we were now drinking, we thanked him and moved on.  We didn’t have much choice now but to drink the water we already had, but it was unsettling.  Later we learned that “beaver fever” is simply a term that the crazy Mainers made up for giardia.  They just have to be different up here! 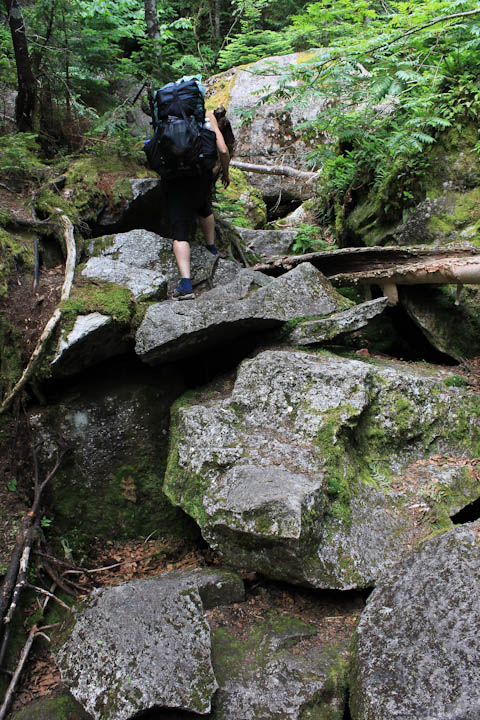 These may all look the same but each one is actually an entirely different set of rocks, carefully chosen by our photographer to portray the perilous and gruelling Mahoosuc Notch trail.  The model in the photos is Bobwhite’s backpack, accompanied by Bobwhite.

This was the spot where you need to remove your backpack to get through.  There is a hole in the rock which leads to a cave, goes under the giant rock and comes out the other side. 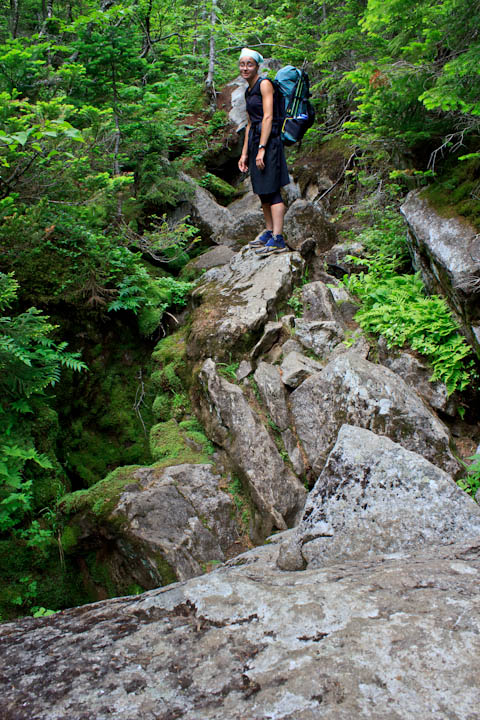 More of the terrain.  This was the equivalent of smooth trail right here. 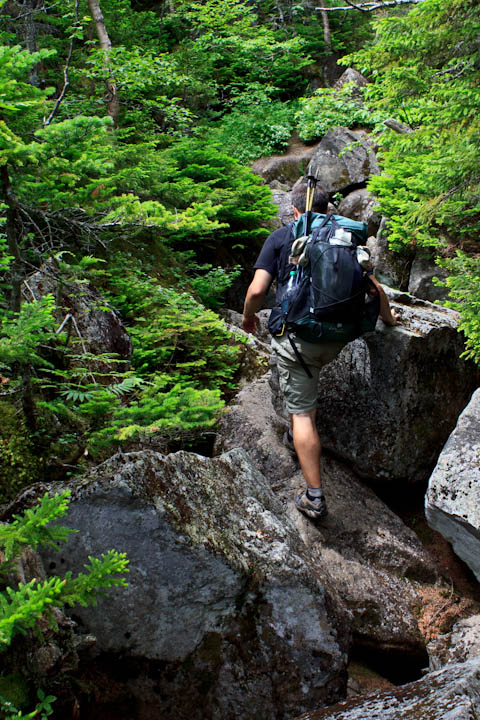 We had very dry conditions, which was very fortunate and made for better leaping from rock to rock.  It hadn’t rained in about 4 days, and because the bottom of the ravine is usually in shadow it takes quite a few days for the rocks to dry out.  It rained after we got through however so people behind us were not so lucky.

This was her photographic eye, not mine.   I like this picture!

This is where the trail checks to see if you’re skinny enough to proceed.  Neither of our packs made the cut. 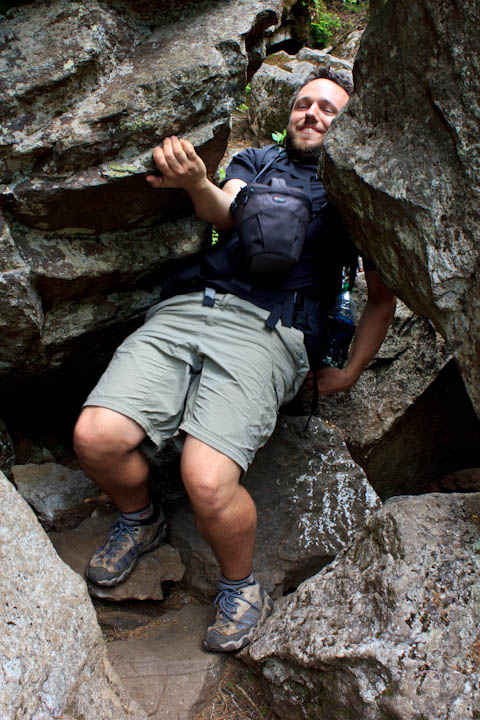 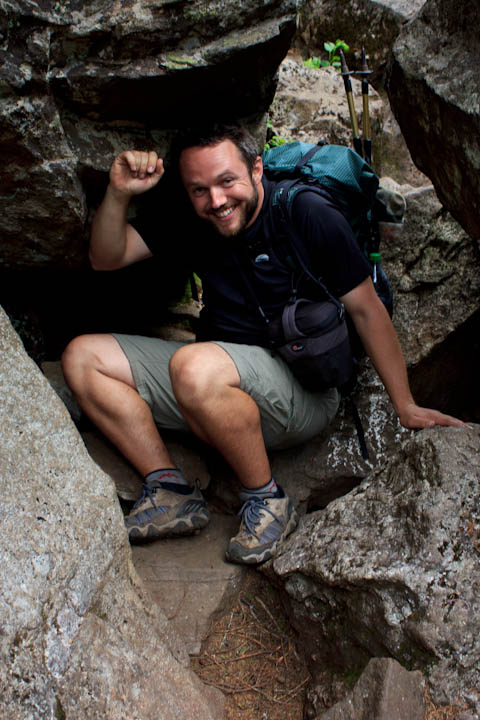 I went with the limbo technique, which worked in the end but wasn’t really easy.  I suppose we could have just removed our packs, but that wouldn’t be nearly as much fun. 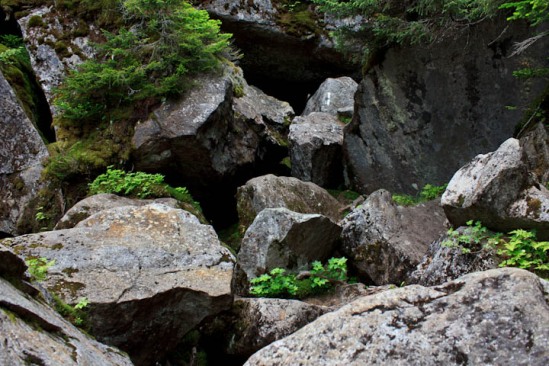 The chance to walk on actual roots again, for just a few feet was really amazing.  It was almost easy for a really brief period.

Another cave!  There were probably 5 or 6 of these.  We never did see any bats.

I’m not sure there is any other place on the AT that uses arrows instead of blazes.  Without them I’m not sure it would be terribly obvious what exactly we were supposed to do in many of these situations. 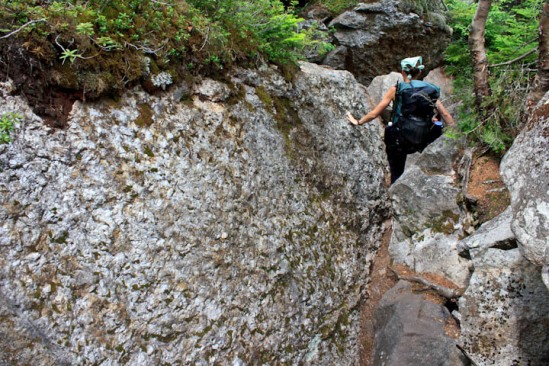 Trail says, go into this dark tunnel.  Somewhere around here we started to loose a bit of steam.  We had been in the notch for nearly two hours. 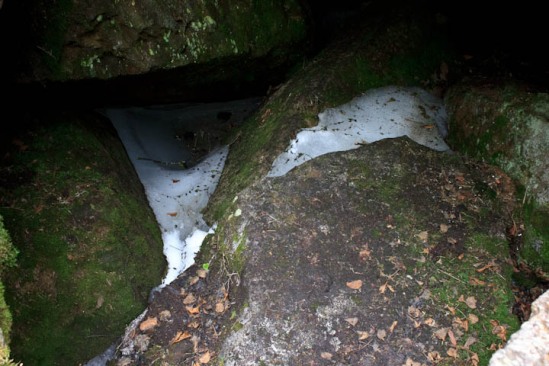 On the far side of the notch we started to see ice and snow in the recesses, which stays here year round.  There were places where extremely frigid air was blowing up from underground caves, and mixes with the 80+ degree humid air we had been dealing with.  It was really nice! 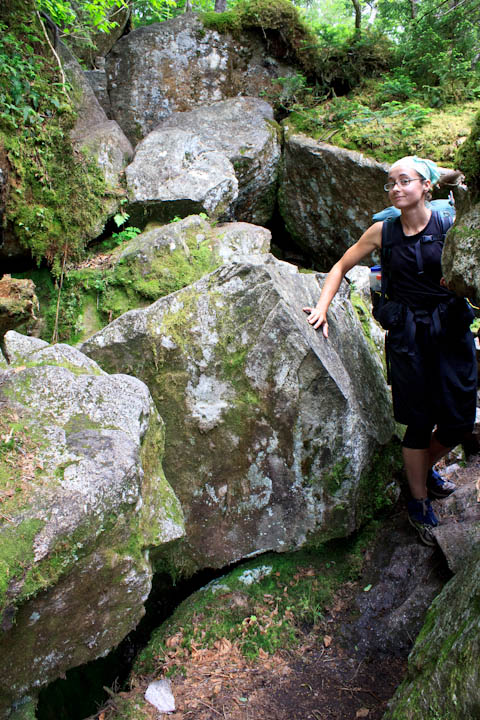 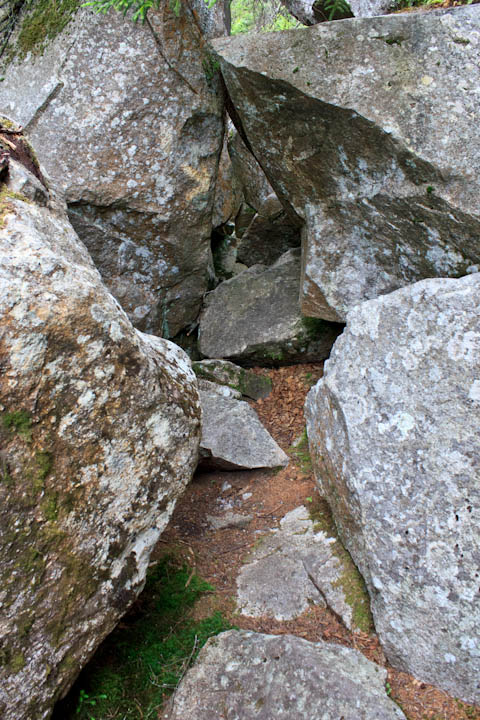 The last portal.  And just like that, we were out, standing on flat trail, and being greeted by a couple who were about to start into the notch.  We had done 1 mile in around 2 and a half hours.  Mahoosuc Notch definitely lives up to its reputation.

Of course that didn’t mean we were done yet.  There is a very brisk climb right after Mahoosuc Notch, followed by a shelter about a mile away.  We opted to stop at the shelter even though we had only gone about 5 miles.  I’m not in as good of shape as Marie is!